I can’t wait for everyone to read this story! It’s an exciting day. If you haven’t downloaded a copy yet go do it now! Keep reading for a brand new excerpt. Callista and Zane were so fun to write.

Spellbound by My Charmer

Zane Rossington, the Marquess of Seabrook is disillusioned and bored. He doesn’t believe in love and lives his life the way he pleases. All of it changes when he finds a mysterious woman roaming around his conservatory at his annual Regency themed charity masquerade ball.

Lady Callista Lyon, the Countess of Marin had one desire–revenge. In the act of finally achieving her goal she is swept over a terrace and somehow finds herself in the conservatory at Seabrook Manor. Uncertain if she succeeded in her revenge, but determined to finally move on, she does her best to adapt to her new life.

In the midst of chaos and uncertainty, can Zane and Callista discover something in each other they both believed lost to them?

“Come out and show me,” Zane demanded. He sat back and waited. If she didn’t come out soon he’d have to go into the dressing room and drag her out. She had no idea what he would dare to do. He wasn’t afraid of taking control of the situation. What could be so bad about what she’d decided to try on first?

After several seconds went by, she stepped out. He sucked in a breath and sat frozen for several agonizing moments. His heart beat rapidly in his chest. She was the loveliest woman he’d ever laid eyes on and the dress she’d tried on emphasized it in exquisite detail. There wasn’t a chance in hell he’d let her wear it anywhere outside of the store. He’d believed the burgundy dress would be form fitting, but he was wrong. This dress was the tightest thing he’d ever seen. How the hell had she managed to put it on? What was it made of? Lycra?

“See I told you that you wouldn’t like it,” she exclaimed as she pulled on the fabric. “It’s strange, and I don’t like how tight it is. It makes breathing rather difficult.”

Zane was growing rather uncomfortable as he watched her yank on the dress. It had to go. In fact, he’d help her remove it. It was the gentlemanly thing to do. Clearly, she was having trouble with it. He rose to his feet and strode to her side. “I believe you’re right, my dear. The dress isn’t you.”

“Absolutely, not,” he agreed and led her back to the dressing room. He guided her back inside and followed behind her making sure the door shut behind them.

“I don’t think you’re supposed to be in here,” she said nervously.

“You could be right,” he agreed. “But who else will help you out of that monstrosity.”

She lifted her chin and met his gaze. “I believe that woman would have assisted me if I’d needed it.”

Zane stared down at her. She was delectable. He had to kiss her and see if she tasted as good as she looked. He leaned down and pressed his lips to hers. Her mouth fell open on a gasp allowing Zane to take advantage. His tongue touched hers and he lost all reason. She wound her arm around his neck giving him the opportunity to pull her tight against him. The material of the dress bunched up under his hands. He wanted to rip it off of her. It didn’t matter what it cost as long as the offending garment was disposed of. This wasn’t the place to press his suit. Zane stepped back and glanced down at her. Her lips were plump from his attention. It took all of his willpower to step away from her when everything inside of him screamed to kiss her again.

“Turn around,” he said huskily.

She tilted her head and said, “Why?”

“This dress has to go. Surely it has some kind of fastening to remove it.”

“No,” she replied. “Actually, it doesn’t. All you have to do is pull it over your head. Would you like me to demonstrate?”

Callista’s hands skimmed the edge of the dress. She licked her lips and held his gaze with her own. Zane swore and clenched his fists. The woman had to be teasing him. His dick hardened to a painful state and she thought to toy with him? She wasn’t an innocent and was well versed in how to entice a man. Zane wasn’t an untried lad who could be messed with. She’d understand that soon enough.

He didn’t expect her to follow through, but she did. The dress was slowly lifted until tiny panties and a flat stomach kept his gaze riveted. Surely she’d stop—nope, she kept going and yanked the offending garment over her head. She let it hit the floor with a thud. Her breasts were hugged by pale pink lace that barely kept them contained. Zane itched to touch them.

God, yes. “What was your first clue?”

Don’t forget to preorder Regency Ever After to read book 6 in the Linked Across Time series. You don’t want to miss Jack and Elizabeth’s story!

Buy Links for Regency Ever After 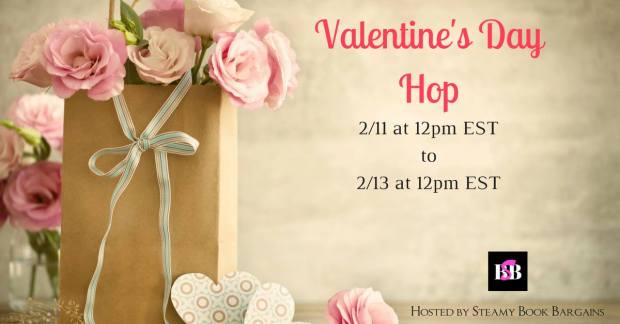 With tons of prizes from over 90 authors and bloggers, including Amazon gift cards, it’s a great way to spend your Valentine’s Day Weekend!

Don’t miss out! Visit one, or all to participate. Easy entries.

Most of all…have fun!

You can start at my stop on my Facebook Page.